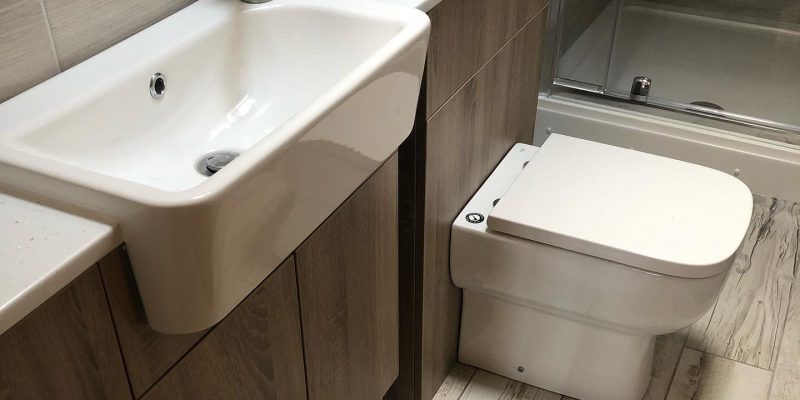 Installed by BPI’s bathroom fitting team and external tiler based in Bicester, this was a great project to work on as we completely transformed an interesting downstairs shower room. This was a challenging bathroom to fit owing to the shape. Whilst it is quite a large room, it is narrow. The narrow shape made it tricker when positioning the toilet and radiator.

The existing suite was removed and the existing surface radiator pipes were chased into the wall so the tiles could cover them. The shower area was re-boarded prior to tiling to help ensure the best watertight surface for tiling.

The shower enclosure was fully tiled and the walls were tiled up to half way with wood effect plank tiles. A light grey grout was chosen as this complemented the finish and does not show dirt as clearly as white.

A brand new concealed cistern toilet and basin over vanity unit were fitted in brown. A slimline worktop was installed across both units. A Burlington mixer shower with drencher were installed with a pivot door shower screen.

The floor was thoroughly prepared using several levelling compounds and then fully tiled. This tiling was also carried into the entrance hallway of the house.