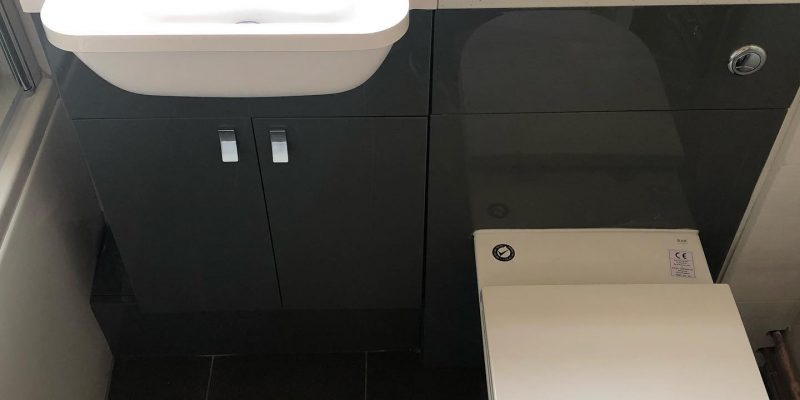 Installed completely by BPI’s bathroom fitting team based in Bicester, Oxfordshire, this bathroom installation was on a bungalow in the Greenwood Homes estate in Bicester.

The existing bathroom was a disabled wet room and the new owner wanted to remove this and completely modernise the bathroom. The bathroom was completely ripped out and fully plastered including the ceiling in preparation for tiling. The walls were fully tiled with 650 x 250 marble effect white / grey tiles.

The existing electric shower was removed and made safe. A new bath was installed with filler taps as well as a new feed up to a mixer shower to replace the electric shower.

The floor was tiled with slate effect porcelain tiles and a mid grey grout too complement the grey units but also contract the white walls giving a two tone effect to the room.

A new concealed cistern unit and back to wall toilet pan were installed alongside a new basin with vanity unit. A worktop was installed over the top to finish off.

As well as a new towel radiator, we also installed a new in line extractor fan and chrome LED dome light.